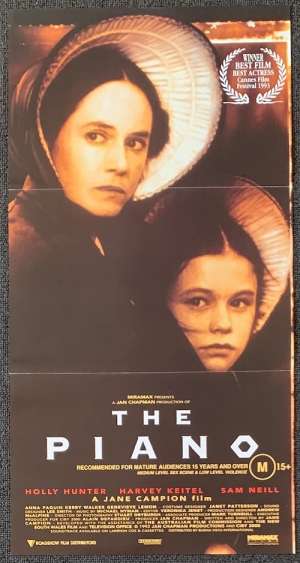 The Piano is a 1993 New Zealand drama film about a mute piano player and her daughter, set during the mid-19th century in a rainy, muddy frontier backwater town on the west coast of New Zealand. The Piano was written and directed by Australian Jane Campion and stars Holly Hunter, Harvey Keitel and New Zealand actors Sam Neill and Anna Paquin in her first acting role. The film's score by Michael Nyman became a best-selling soundtrack album, and Hunter played her own piano pieces for the film. She also served as sign language teacher for Paquin, earning three screen credits. The film is an international co-production by Australian producer Jan Chapman with the French company Ciby 2000.The Piano was a success both critically and commercially. Hunter and Paquin both received high praise for their respective roles. The Piano won three Academy Awards out of eight total nominations in 1994: Best Actress for Hunter, Best Supporting Actress for Paquin, and Best Original Screenplay for Campion. Paquin was 11 years old at the time and is the second youngest actor to win an Oscar in a competitive category.