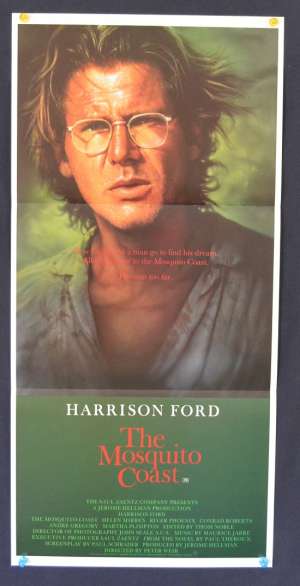 Daybill Poster with John Alvin art.The Mosquito Coast is a 1986 American drama film directed by Peter Weir and starring Harrison Ford (Jack Nicholson was originally offered Ford’s role but backed out partly because he could not watch the Los Angeles Lakers games in Belize, where part of the film was to be shot), Helen Mirren, Andre Gregory, and River Phoenix. It is based on the 1981 novel of the same name by Paul Theroux. The film tells the story of a family that leaves the United States and tries to find a happier and simpler life in the jungles of Central America. However, their jungle paradise quickly turns into a dystopia as their stubborn father's behaviour becomes increasingly erratic and aggressive. The film was initially a critical and commercial disappointment but has since received much stronger modern reviews and is now publicly highly appreciated. Ford himself is on record as saying he is happy he did the film.