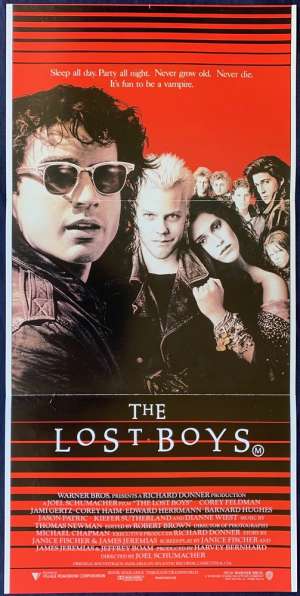 Rare Daybill Poster.The Lost Boys is a 1987 American horror comedy film directed by Joel Schumacher. The film was originally set to be directed by Richard Donner and the screenplay, written by Janice Fischer and James Jeremias was modelled on Donner's recent hit The Goonies. However Donner pulled out and Schumacher stepped in giving the film a more adult approach. Starring in the film were Corey Haim, Jason Patric, Kiefer Sutherland, Jami Gertz, Corey Feldman, Dianne Wiest, Edward Herrmann, Alex Winter, Jamison Newlander, and Barnard Hughes. Director Joel Schumacher has said he had "one of the greatest [casts] in the world. They are what make the film." Most of the younger cast members were relatively unknown. The film is about two brothers who move to California to a fictional beach town called "Santa Carla", and end up fighting a gang of young vampires. The title is a reference to the Lost Boys in J. M. Barrie's stories about Peter Pan and Neverland, who, like the vampires, never grow up. Most of the film was shot in Santa Cruz, California. The film has spawned a franchise with two sequels (Lost Boys: The Tribe and Lost Boys: The Thirst). Critical reception to the movie was positive and The Lost Boys opened at #2 during its opening weekend. It enjoyed a domestic total of over $32.2 million against an $8.5 million budget. The film is often credited with bringing a more youthful appeal to the vampire genre by making the vampires themselves sexy and young.