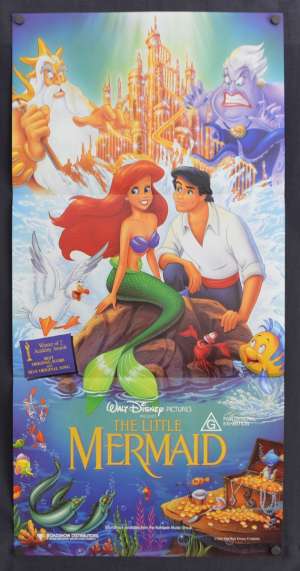 Rare Daybill Poster.The Little Mermaid was the first in a series of blockbusters that restored the venerable firm's reputation as the world's premiere animated-feature factory. The title character is a precocious teenager named Ariel, the daughter of Triton, king of the Sea. Against her dad's wishes, Ariel journeys beyond her own world to the surface, where she falls in love with Prince Eric, a handsome human. The obligatory Disney comic relief is handled by such freshly minted characters as Sebastian the Crab, who, courtesy of voiceover artist Samuel E. Wright, sings the film's Oscar-winning "Under the Sea."