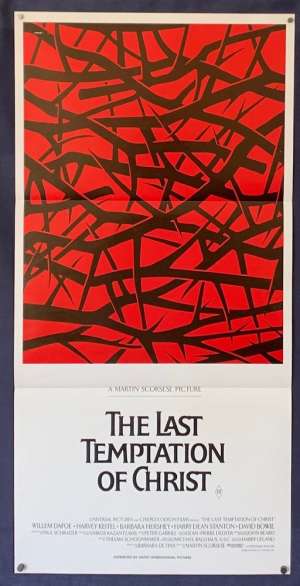 Daybill Poster.The Last Temptation of Christ is a 1988 religious drama film directed by Martin Scorsese. Written by Paul Schrader with uncredited rewrites from Scorsese and Jay Cocks. The film is an adaptation of Nikos Kazantzakis' controversial 1955 novel The Last Temptation of Christ. The film, starring Willem Dafoe, Harvey Keitel, Barbara Hershey, Andre Gregory, Harry Dean Stanton and David Bowie, was shot entirely in Morocco. Like the novel, the film depicts the life of Jesus Christ and his struggle with various forms of temptation including fear, doubt, depression, reluctance and lust. This results in the book and film depicting Christ being tempted by imagining himself engaged in sexual activities, a notion that has caused outrage from some Christians. The film received positive reviews from critics and some religious leaders and Scorsese received a nomination for the Academy Award for Best Director. Hershey's performance as Mary Magdalene earned her a nomination for the Golden Globe for Best Supporting Actress. Peter Gabriel's music score also received acclaim, including a nomination for the Golden Globe Award for Best Original Score. Dafoe's performance was praised, with some thinking he should have been nominated for Best Actor.