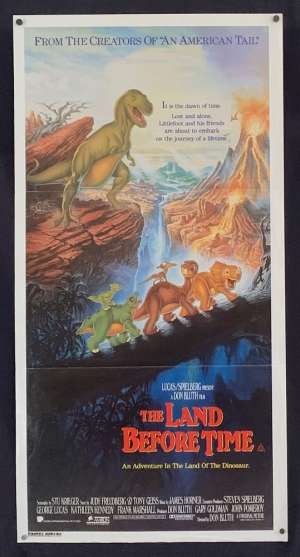 Daybill Poster.The Land Before Time is a 1988 animated adventure drama film directed & co-produced by Don Bluth & executive produced by Steven Spielberg, George Lucas,Kathleen Kennedy, & Frank Marshall.It features dinosaurs living in the prehistoric times and concerns a young Brontosaurus named Littlefoot who is orphaned & the ongoing search for the Great Valley.This is the only film in The Land Before Time series that is not a musical,as well as the only one to be released theatrically worldwide.Released by Universal Pictures,the film was a critical & financial success,& spawned a multimillion-dollar franchise with 13 direct-to-video sequels & a TV series (without involvement from Bluth,Spielberg,or Lucas).