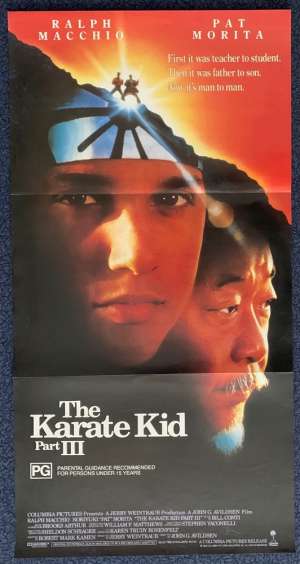 Daybill Poster.The Karate Kid Part III is a 1989 American martial arts drama film and the second sequel to The Karate Kid (1984). The film stars Ralph Macchio, Pat Morita, Robyn Lively, and Thomas Ian Griffith in his film debut. As was the case with the first two films in the series, it was directed by John G. Avildsen and written by Robert Mark Kamen, with stunts choreographed by Pat E. Johnson and the music composed by Bill Conti. In the film, the returning John Kreese, with the help of his best friend Terry Silver, attempts to gain revenge on Daniel and Mr. Miyagi which involves hiring a ruthless martial artist and harming their relationship.