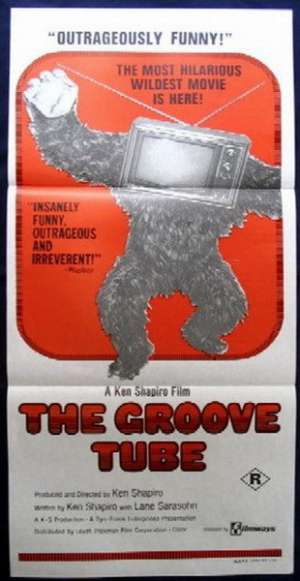 Daybill Poster. The Groove Tube is a 1974 American independent comedy film written and produced by Ken Shapiro and starring Shapiro, Richard Belzer and Chevy Chase. It features the song "Move On Up" by Curtis Mayfield in its opening scene. The low-budget movie satirizes television and the counterculture of the early 1970s. The film was derived from sketches shot on videotape and shown at the Channel One Theater on East 60th St. in New York, a venue that featured R-rated video recordings shown on three television sets, which was a novelty to the audiences of the time. Compilations of sketches from these presentations were taken on tour to college venues, and based on audience responses, the best-received sketches were restaged on film with most of the original actors reprising their roles. The news desk satire, including the signature line "Good night, and have a pleasant tomorrow," was later used by Chase for his signature Weekend Update piece on Saturday Night Live, although in the film he does not appear in that segment. Randa Haines, who later directed Children of a Lesser God, was script supervisor. The film was reissued in 1975, 1976 and 1977 and as of July 1, 1977 it had grossed $28,572,438 and has since achieved cult status.