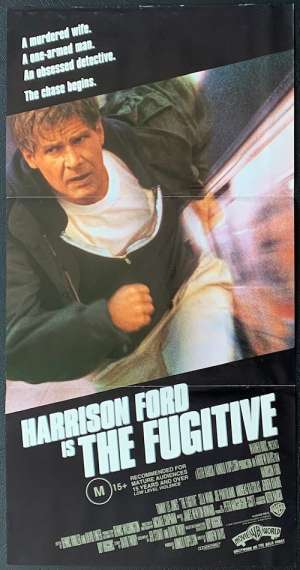 Daybill Poster.The Fugitive is a 1993 American action thriller film based on the 1960s television series of the same name created by Roy Huggins. The film was directed by Andrew Davis and stars Harrison Ford and Tommy Lee Jones, with supporting roles by Sela Ward, Joe Pantoliano and Andreas Katsulas. Harrison Ford was not originally cast for the role of Dr. Richard Kimble. Instead, other actors were auditioned for the part, including Alec Baldwin, Nick Nolte, Kevin Costner, and Michael Douglas. Although the role of Gerard went to Tommy Lee Jones, Gene Hackman and Jon Voight were both considered for the role. The Fugitive premiered in the United States on August 6, 1993, and was a critical and commercial success, spending six weeks as the #1 film in the United States, and grossing nearly $370 million worldwide against a $44 million budget. It was the third highest-grossing film of 1993 domestically. Nominated for seven Academy Awards including Best Picture; Jones won the Academy Award for Best Supporting Actor. It has come to be viewed as one of the greatest action films of the 1990s.