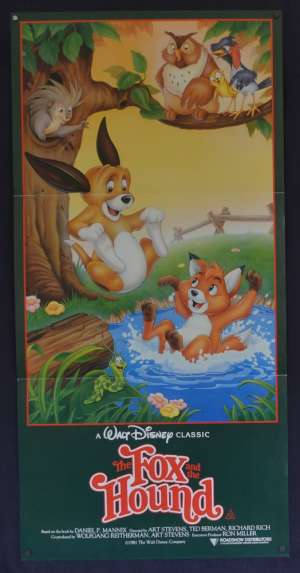 Original Australian Daybill movie poster The Fox And The Hound

The Fox and the Hound is a 1981 American animated drama film produced by Walt Disney Productions and loosely based on the novel of the same name by Daniel P. Mannix. The film tells the story of two unlikely friends, a red fox named Tod and a hound dog named Copper, who struggle to preserve their friendship despite their emerging instincts and the surrounding social pressures demanding them to be adversaries. Directed by Ted Berman, Richard Rich and Art Stevens, the film included the voices of Mickey Rooney, Kurt Russell, Keith Mitchell and Corey Feldman. The Fox and the Hound was released to theaters on July 10, 1981 to financial success. At the time of release it was the most expensive animated film produced to date, costing $12 million. Great poster artwork by Bill Morrison.