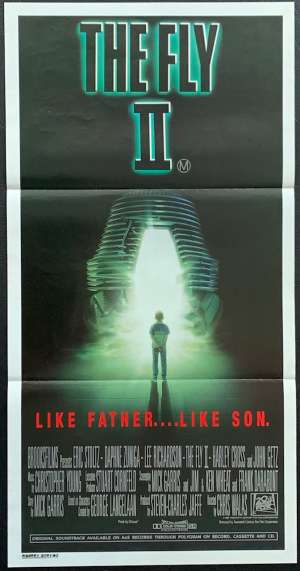 Poster artwork by Richard Mahon. The Fly II is a 1989 American science fiction horror film starring Eric Stoltz and Daphne Zuniga. It was directed by Chris Walas as a sequel to the Academy Award-winning film The Fly (1986), itself a remake of the 1958 film of the same name. Stoltz's character in this sequel is the adult son of Seth Brundle, the scientist-turned-'Brundlefly', played by Jeff Goldblum in the 1986 remake. With the exception of stock footage of Goldblum from the first film, John Getz was the only actor to reprise his role.David Hughes from Empire Magazine awarded the film 3/4 stars, writing, "Whilst this fly is not as tightly scripted or keenly directed as its parent, it does have pace and breathless tension..”.