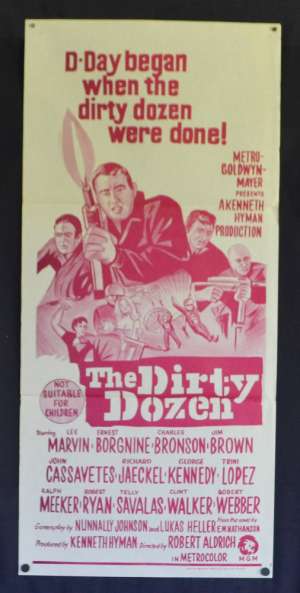 The Dirty Dozen is a 1967 American war film directed by Robert Aldrich, released by MGM, starring Lee Marvin. The picture was filmed at MGM-British Studios and features an ensemble supporting cast including Ernest Borgnine, Charles Bronson, Jim Brown, John Cassavetes, Robert Ryan, Telly Savalas, Robert Webber, Donald Sutherland and George Kennedy. Seven of the cast actually served in World War 2. The film is based on E. M. Nathanson's novel of the same name that was inspired by a real-life group called the "Filthy Thirteen". John Wayne was the original choice for the Reisman role, but he turned down the role because he objected to the adultery present in the original script. Jack Palance refused the "Archer Maggott" role when they would not rewrite the script to make his character lose his racism. On release, the film was criticised for its level of violence but commercially, The Dirty Dozen was a massive success. Produced on a budget of $5.4 million, it grossed $45.3 million. It was the fifth-highest-grossing film of 1967 and MGM's highest-grossing film of the year. The film was nominated for four Academy Awards, winning in the category Best Sound Effects. Sequel wise, Lee Marvin, Richard Jaeckel and Ernest Borgnine reprised their roles for The Dirty Dozen: Next Mission in 1985. Two other sequels would follow on from this.