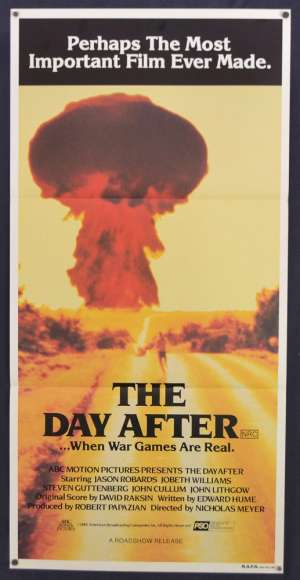 The starkly realistic drama of nuclear confrontation and its devastating effect on a group of average American citizens caused much controversy upon its initial U.S. TV in 1983. Previous films depicted the Nuclear weapons race as the domain of over zealous military staff and politicians, this film focuses firmly on the effects a devastating Nuclear holocaust would have on the average Joe. The story takes place in Lawrence, Kansas, the geographical near centre of the U.S. We are succinctly introduced to a cross-section of American life; a doctor , a graduate student, a young bride-to-be, and an academic, before the Bomb destroys nearby Kansas City. The resulting destruction is entirely horrific, however a few manage to survive whilst struggling to come to terms with the inevitable collapse of society, not to mention the rising radiation levels. As a protest vehicle The Day After is a bleak look at the effects Nuclear war would have on humanity and is no less powerful, more than 20 years after its initial release.