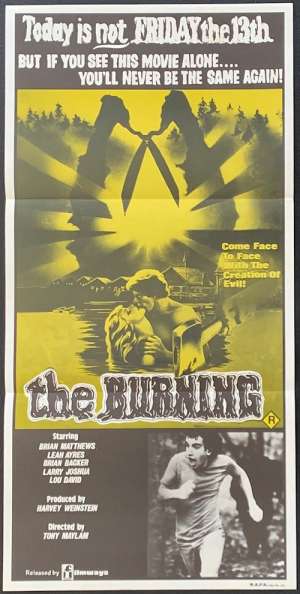 The Burning is a 1981 slasher horror film directed by Tony Maylam and written by Peter Lawrence and Bob Weinstein. It is based on an original story by Maylam, Weinstein, and Brad Grey, with a musical score by Rick Wakeman. The film is loosely based on the upstate New York urban legend of Cropsey, a tale that became popular at summer camps in the 1960s and '70s. Lou David stars as the maniacal Cropsey, while Brian Matthews plays the heroic camp Counsellor that must stop him. The film is also the feature-film debut of Seinfeld's Jason Alexander as well as future Academy Award winners Fisher Stevens and Holly Hunter. Legendary make-up artist Tom Savini, notable for his works on Dawn of the Dead (1978), Maniac (1980), and the original Friday the 13th, created the effects for The Burning. While the film did not generate the interest and revenue achieved by other slasher films of the time, it has since gained a cult following and reappraisal by critics.