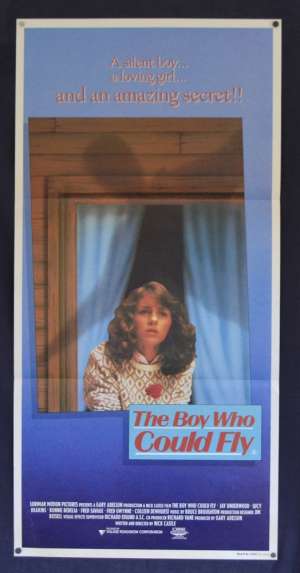 Original Australian Daybill Movie Poster The Boy Who Could Fly

The Boy Who Could Fly is a 1986 American fantasy comedy-drama film written and directed by Nick Castle. It was produced by Lorimar Productions for 20th Century Fox, and released theatrically on September 26, 1986.The film stars Lucy Deakins as 14-year-old Milly Michaelson, Jay Underwood as Eric Gibb, a boy with autism, Bonnie Bedelia as Milly's mother, Fred Savage as Milly's little brother, Colleen Dewhurst as a teacher, Fred Gwynne as Eric's uncle, Janet MacLachlan, and Mindy Cohn. After the suicide of her terminally ill father, Milly becomes friends with Eric, who lost both of his parents to a plane crash. Together, Eric and Milly find ways to cope with the loss and the pain as they escape to faraway places