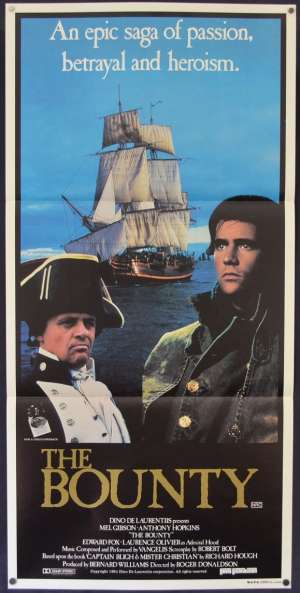 Original Daybill Poster.The Bounty is a 1984 British historical drama film directed by Roger Donaldson, starring Mel Gibson and Anthony Hopkins, and produced by Bernard Williams with Dino De Laurentiis as executive producer. It is the fifth film version of the story of the mutiny on the Bounty. The screenplay was by Robert Bolt and it was based on the book Captain Bligh and Mr. Christian (1972) by Richard Hough. The music score was composed by Vangelis and the cinematography was by Arthur Ibbetson. Also starring were Laurence Olivier, Edward Fox, Daniel Day-Lewis, Bernard Hill and Liam Neeson.This version was originally a longstanding project of director David Lean. It was originally to have been released as a two-part film but Lean could not find financial backing for both films after Warner Bros. withdrew from the project. Lean decided to combine it into one, and even looked at a seven-part TV series. Lean was ultimately forced to abandon the project even after overseeing casting and the construction of the Bounty replica. Mel Gibson brought in his friend Roger Donaldson to direct the film, as producer De Laurentiis did not want to lose the millions he had already put into the project. Anthony Hopkins was one of two actors considered for the role of Captain Bligh by David Lean. The other was Oliver Reed. Christopher Reeve, Sting and David Essex were considered for the role of Fletcher Christian. The role of Peter Heywood (who inspired the character 'Roger Byam' in the novel and earlier film versions) was originally intended to be played by Hugh Grant. The film received generally positive reviews, many liking the film for realism and historical accuracy as well as being entertaining.