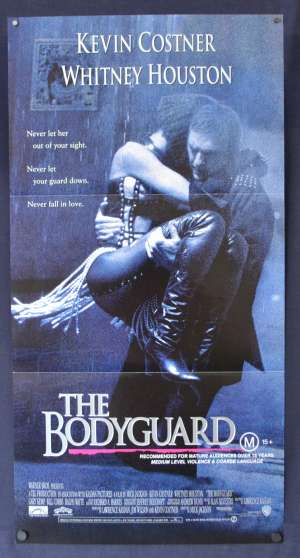 Daybill Poster.The Bodyguard is a 1992 American romantic thriller film directed by Mick Jackson, written by Lawrence Kasdan (Raiders Of The Lost Ark), and starring Kevin Costner and Whitney Houston. Costner stars as a former Secret Service agent-turned-bodyguard who is hired to protect Houston's character, a music star, from an unknown stalker. The film was Houston's acting debut and was the second-highest-grossing film worldwide in 1992, making $411 million worldwide. The soundtrack became the best-selling soundtrack of all time, selling more than 45 million copies worldwide. Being Lawrence Kasdan's first screenplay, the film was originally proposed in 1976 with Steve McQueen and Diana Ross in the leads but the project stalled. Later, in 1979, Ryan O'Neal and Diana Ross were set to star as the leads, but again, production was put on hold and the script became stuck in "development hell", before being finally released in 1992. Two songs from the film, "Run to You" and "I Have Nothing", were nominated for an Academy Award for Best Original Song.The soundtrack was also nominated for four Grammy Awards, winning three, including Album of the Year for its album of the same name.