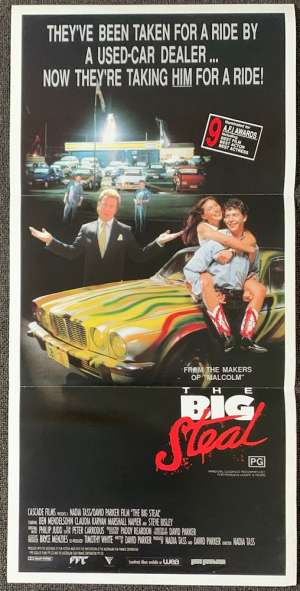 Rare Original Australian Daybill Poster.The Big Steal is a 1990 Australian caper film directed by Nadia Tass starring Ben Mendelsohn, Claudia Karvan and Steve Bisley. David Parker was the scriptwriter and cinematographer. The film won three Australian Film Institute awards. The film was originally known as Mark Clark Van Ark. There were problems raising the money so Tass and Parker mortgaged their house, as they did with their first film. The Big Steal was met with positive reviews from critics and audiences. The movie score was made up in part by songs by Philip Judd and Tim Finn, The Makers, Boom Crash Opera and Mental As Anything.