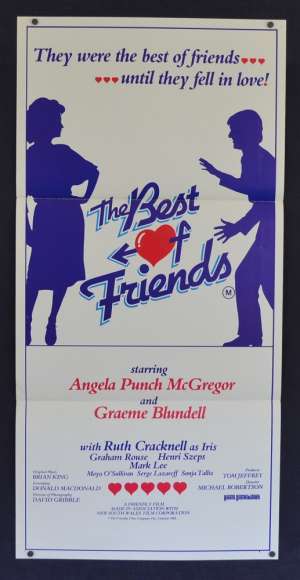 'Country Of Origin' Original Daybill Poster The Best Of Friends

"They were the best of friends . . . until they fell in love" Best Of Friends was directed by Michael Robertson and produced by Tom Jeffrey. The film had some very capable talent which included Angela Punch McGregor, Graeme Blundell, Ruth Cracknell and Mark Lee to name a few. However the film did not get any AFI nominations and performed poorly at the box office. Consequently it did not receive a wide circulation at the cinemas as it was only shown for a week in alot of instances and the original movies posters are now very rare.