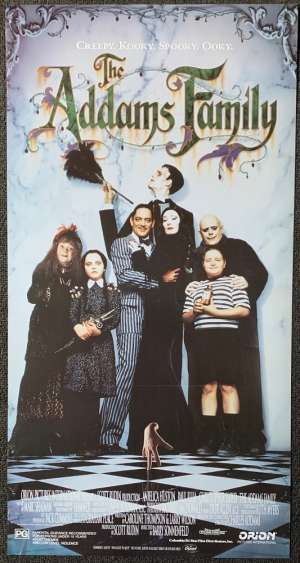 Original Daybill Poster.The Addams Family is a 1991 American supernatural black comedy film based on the characters from the cartoon created by cartoonist Charles Addams and the 1964 TV series produced by David Levy. Directed by former cinematographer Barry Sonnenfeld in his screen directing debut, the film stars Anjelica Huston, who was nominated for a Golden Globe for her performance as Morticia Addams, Raúl Juliá as Gomez Addams, Christina Ricci as Wednesday Addams, and Christopher Lloyd as Uncle Fester. The film focuses on a bizarre, macabre, aristocratic family who reconnect with who they believe to be a long-lost relative, Gomez's brother, Fester Addams, who is actually the adopted son of a con artist intending to swindle the Addams clan out of their vast wealth and fortune. The Addams Family was awarded Best Horror Film of the Year in 1991 by the Horror Hall of Fame. The film was also nominated for an Academy Award for achievement in costume design.