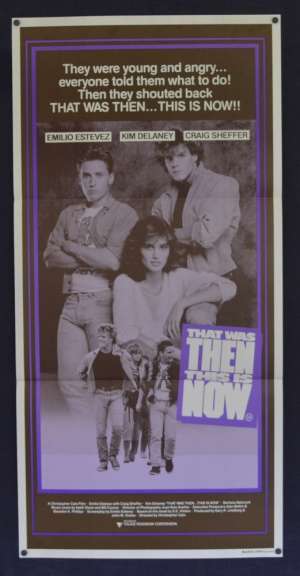 Original Australian Daybill Movie Poster That Was Then This Is Now.

That Was Then This Is Now is a 1985 American drama film based on the novel of the same name by S. E. Hinton and a sequel to The Outsiders. A troubled young man, Mark Jennings (Emilio Estevez) has always looked up to his older friend, Bryon Douglas (Craig Sheffer). But when Bryon starts dating Cathy Carlson (Kim Delaney), Mark gets jealous, begins acting out and gets into dealing drugs. After the friends' mentor, Charlie Woods (Morgan Freeman), suddenly dies and Cathy's brother (Frank Howard) goes missing, Bryon suspects Mark is involved. As the case unravels, their friendship is put to the test.