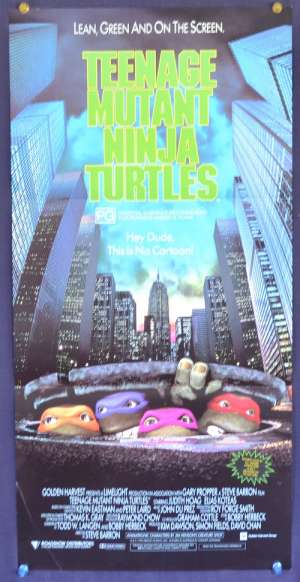 Teenage Mutant Ninja Turtles is a 1990 American martial arts superhero comedy film directed by Steve Barron, based on the fictional superhero team. The story follows Splinter and the turtles, their meeting April O'Neil and Casey Jones, and their confrontation with Shredder and his Foot Clan. It stars Judith Hoag, Elias Koteas, and the voices of Brian Tochi, Robbie Rist, Corey Feldman, and Josh Pais. The film is an adaptation of the early Teenage Mutant Ninja Turtles comics, with several elements taken from the animated TV series airing at the time. The turtle costumes were developed by Jim Henson's Creature Shop, one of Henson's last projects before his death shortly after the premiere. Teenage Mutant Ninja Turtles became the highest-grossing independent film at the time, the ninth-highest-grossing film worldwide of 1990, and the highest-grossing film in the series until the 2014 reboot. The film was also nominated for awards by The Academy of Science Fiction, Fantasy and Horror Films.