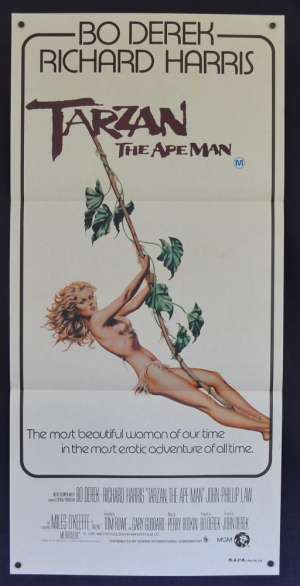 Daybill Poster with artwork by Olivia De Berardinis.Tarzan, the Ape Man is a 1981 adventure film directed by John Derek and starring his wife Bo Derek, Miles O'Keeffe, Richard Harris, and John Phillip Law. The screenplay by Tom Rowe and Gary Goddard is loosely based on the novel Tarzan of the Apes by Edgar Rice Burroughs, but from the point of view of Jane Parker. It is the final of three filmed versions of the story released by Metro-Goldwyn-Mayer.The original music score is composed by Perry Botkin Jr. Former Tarzan actor Jock Mahoney, billed as Jack O'Mahoney, was the film's stunt coordinator. The film was a box-office success and Film Critic Roger Ebert praised the forthright depiction of the sexual passion and tension between Tarzan and Jane, which had more typically been downplayed in film adaptations of the characters.