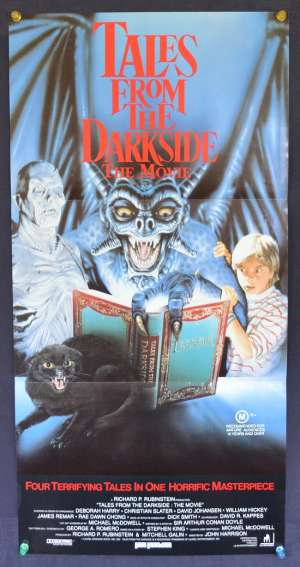 Original Australian Daybill movie poster. Tales from the Darkside: The Movie is a 1990 American horror anthology film directed by John Harrison, and based on the anthology television series Tales from the Darkside. The film depicts a kidnapped paperboy who tells three stories of horror to the suburban witch who is preparing to eat him, à la Hansel and Gretel.The film is sometimes said to have been intended as Creepshow 3, a sequel to George A. Romero and Stephen King's popular horror anthologies Creepshow and Creepshow 2. However, this is not supported by any real evidence.Tom Savini has been quoted as saying that this film is the real Creepshow 3, which could be how the rumor started, though he may just have been referring to the similar nature of the movies and the involvement of King and Romero. The story titled "Cat from Hell" was originally going to appear in Creepshow 2, but was scrapped due to budgetary reasons. Three stories are involved Lot 249, Cat From Hell and Lover's Vow.