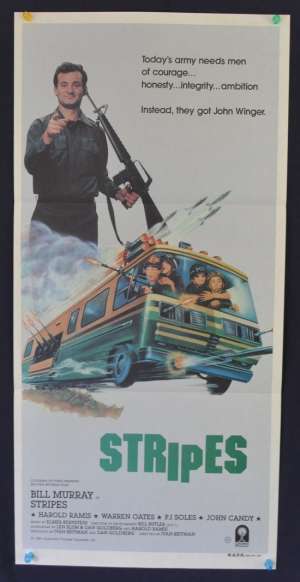 Daybill Poster. Stripes is a 1981 American military comedy film directed by Ivan Reitman, starring Bill Murray, Harold Ramis, Warren Oates, P. J. Soles, Sean Young, John Candy. Several actors including John Larroquette,  Judge Reinhold and Bill Paxton were featured in their first significant film roles. The origins of Stripes is as follows: On his way to the premiere of Meatballs, Ivan Reitman thought up the idea for a film: "Cheech and Chong join the army". Cheech and Chong's manager thought the script was very funny; however, the comedy duo wanted complete creative control. Upon hearing this, Reitman wanted to change the two main characters to ones suited for Bill Murray and Harold Ramis. Ramis had already co-written National Lampoon's Animal House, Meatballs, and Caddyshack, but was relatively unknown as a film actor. This proved not to be a problem as every scene in Stripes had some element of improvisation due in large part to Murray and Ramis. Consequently Stripes was well received by critics and audiences grossing $85,297,000 in North America alone.