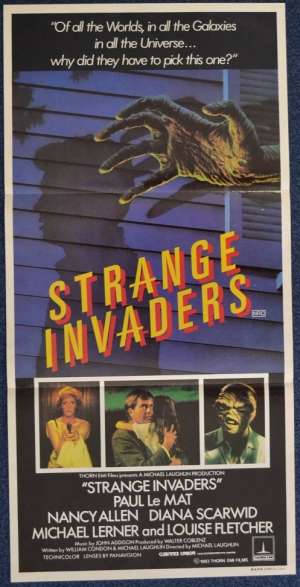 Daybill Poster.Strange Invaders is a 1983 science-fiction film directed by Michael Laughlin. It was made as a tribute to the sci-fi films of the 1950s, notably The Invasion of the Body Snatchers. It stars Paul Le Mat, Nancy Allen and Diana Scarwid. The film was intended to be the second installment of the aborted Strange Trilogy with Strange Behavior, another 1950s spoof by Laughlin, but the idea was abandoned after Strange Invaders failed to attract a wider audience. June Lochart and Mark Goddard both stars from the 1960’s TV Show ‘Lost In Space’ also star in what has become a cult classic.