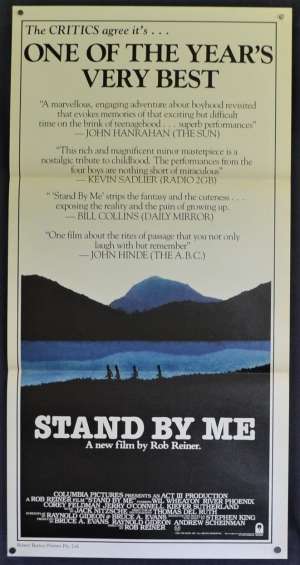 Stand By Me is a 1986 American coming-of-age comedy-drama adventure film directed by Rob Reiner and starring Wil Wheaton, River Phoenix, Corey Feldman, Jerry O'Connell, John Cusack, Kiefer Sutherland and Richard Dreyfuss. Based on Stephen King's novella The Body, the title is derived from the Ben E. King song of the same name, which plays over the opening and end credits. The film tells the story of four boys in small town Oregon who go on a hike across the countryside to find the dead body of a missing child.Wil Weaton in an interview has attributed the success of the film to Rob Reiner finding the key four young boys who basically were the characters they played. Wheaton would recall "When you saw the four of us being comrades,that was real life, not acting." The film ended up earning $52,287,414 overall, well above its $8 million budget. Both Stephen King and Film critics gave the film positive reviews. It was nominated for one Academy Award (for Best Adapted Screenplay) and two Golden Globe Awards (for Best Motion Picture-Drama and Best Director, respectively).