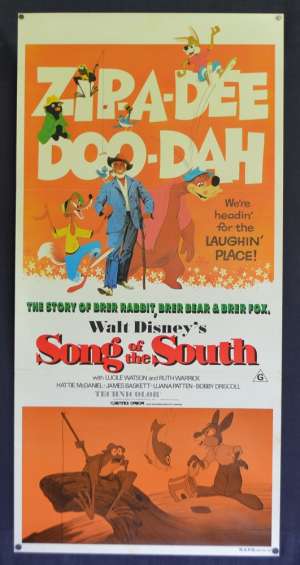 Song of the South is a 1946 American live-action/animated musical film produced by Walt Disney and released by RKO Radio Pictures, based on the Uncle Remus stories collected by Joel Chandler Harris. It was Disney's first film to feature live actors, who provide a sentimental frame story for the animated segments. The film depicts the character Uncle Remus, presumably a former slave, cheerfully relating to several children, including the film's protagonist, the folk tales of the adventures of anthropomorphic Br'er Rabbit and his enemies, Br'er Fox and Br'er Bear. The film's song "Zip-a-Dee-Doo-Dah" won the 1947 Academy Award for Best Song and is frequently used as part of Disney's montage themes and has become widely used in popular culture. James Baskett was given an honorary Academy Award in 1948 for his portrayal of Uncle Remus - the first Oscar (although an honorary one) to a male African-American actor.