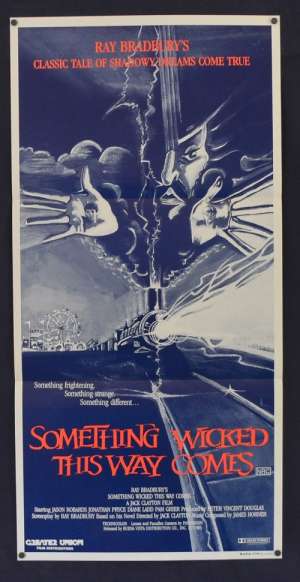 Original Australian Daybill movie poster.Something Wicked This Way Comes is a 1983 American horror fantasy film directed by Jack Clayton and produced by Walt Disney Productions from a screenplay written by Ray Bradbury based on his novel of the same name. The novel's title was taken directly from a line in Act IV of William Shakespeare's Macbeth: "By the pricking of my thumbs /Something wicked this way comes." The film stars Jason Robards, Jonathan Pryce, Diane Ladd, and Pam Grier. It was shot in Vermont and at the Walt Disney Studios in Burbank, California. It was the final Disney film to be released under the "Walt Disney Productions" label.