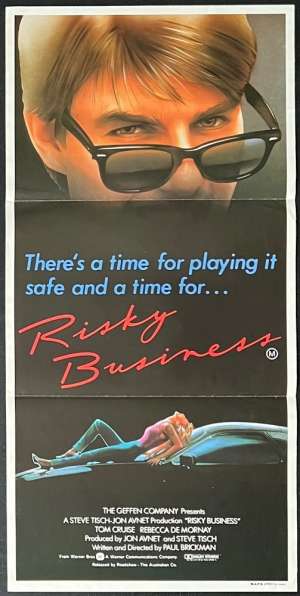 Daybill Poster.Risky Business is a 1983 American romantic comedy film written and directed by Paul Brickman, making his directorial debut. It stars Tom Cruise and Rebecca De Mornay. The film launched Cruise to stardom. It covers themes including materialism, loss of innocence, coming of age and capitalism. Risky Business was acclaimed by critics. It is also considered by many as one of the best films of 1983. Critics called it a film of "new faces and inspired insights and genuine laughs" and "one of the smartest, funniest, most perceptive satires in a long time" that "not only invites comparison with The Graduate, it earns it".