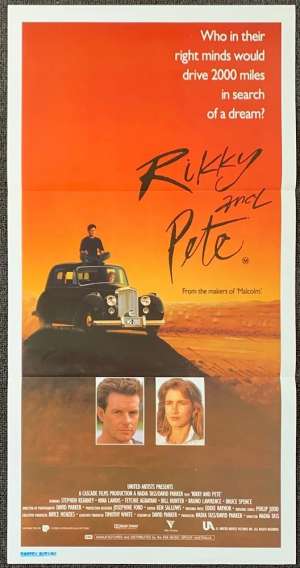 Country Of Origin Daybill poster.Rikky and Pete is a 1988 Australian film directed by Nadia Tass, written by David Parker, and starring Stephen Kearney and Nina Landis. Also starring were Bill Hunter, Bruce Spence, Lews Fitzgerald and Bruno Lawrence. Rikky Menzies (Nina Landis) and Pete Menzies (Stephen Kearney) are sister and brother. Rikky is an out-of-work geologist, and aspiring singer (vocals by Wendy Matthews). Pete is a misfit who dreams up weird inventions. Pursued by police sergeant Whitstead (Bill Hunter), on whom Pete has been playing practical jokes, they flee to the mining town of Mount Isa.While United Artists provided $3 million of the budget, the rest of the money was raised privately in Australia through 10BA. Shooting took place in Melbourne and Broken Hill. Most of the songs on the soundtrack album were written and/or performed by alumni of Split Enz and their later bands Crowded House, The Makers, and Schnell Fenster.