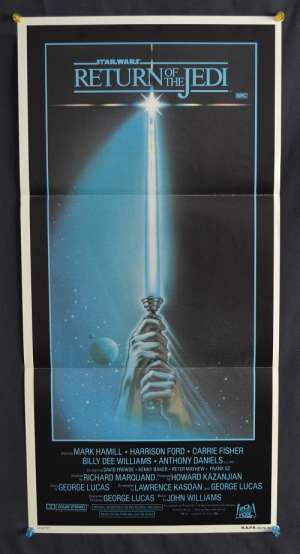 Return of the Jedi (also known as Star Wars: Episode VI – Return of the Jedi) is a 1983 American epic space opera film directed by Richard Marquand. The screenplay by Lawrence Kasdan and George Lucas was from a story by Lucas, who was also the executive producer. It is the third and final instalment in the original Star Wars trilogy and the first film to use THX technology. Filming took place in England, California, and Arizona from January to May 1982. Strict secrecy surrounded the production and the film used the working title Blue Harvest to prevent price gouging. The original teaser trailer for the film carried the name Revenge of the Jedi. In December 1982, Lucas decided that "Revenge" was not appropriate as Jedi should not seek revenge and returned to his original title. By that time thousands of "Revenge" teaser posters (with artwork by Drew Struzan) had been printed and distributed. Lucasfilm stopped the shipping of the posters and sold the remaining stock of 6,800 posters to Star Wars fan club members for $9.50. Today they can fetch over US$1,000.00. This advance artwork with the light saber was created by Tim Reamer.