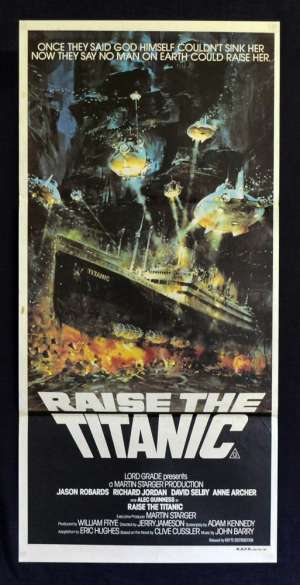 Raise The Titanic is a 1980 adventure film by Lew Grade's ITC Entertainment and directed by Jerry Jameson. The film, which was written by Eric Hughes (adaptation) and Adam Kennedy (screenplay), was based on the book of the same name by Clive Cussler. The story concerns a plan to recover the RMS Titanic due to the fact that it was carrying cargo valuable to Cold War hegemony.Although the film starred Jason Robards, Richard Jordan, David Selby, Anne Archer, and Sir Alec Guinness.The artwork by Berkey for this poster is very sort after.