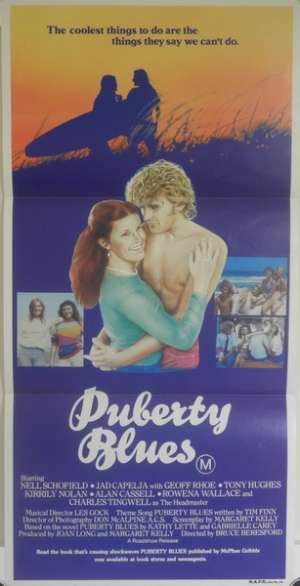 Country Of Origin Poster. Puberty Blues directed by Bruce Beresford is based on the 1979 novel of the same name written by Gabrielle Carey and Kathy Lette. The novel is a protofeminist teen story about two 13-year-old girls from the lower middle class Sutherland Shire in Sydney. The girls attempt to create a popular social status by ingratiating themselves with the "Greenhill gang" of surfers, who have an unrestrained attitude toward casual sex, drugs and alcohol over the course of summer. Puberty Blues grossed $3,918,000 at the box office in Australia. The film starred Nell Schofield, Jad Capelja, Geoff Rhoe, Tony Hughes, Kirrily Nolan, Alan Cassell, Rowena Wallace and Charles Tingwell.