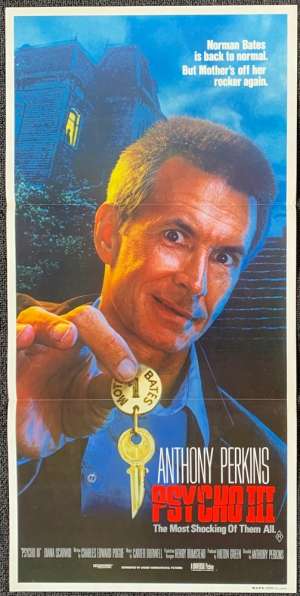 Daybill Poster.Psycho III is a 1986 American slasher film, and the third film in the Psycho franchise. It stars Anthony Perkins, who also directs the film, reprising the role of Norman Bates. It co-stars Diana Scarwid, Jeff Fahey, and Roberta Maxwell. The screenplay is written by Charles Edward Pogue. The original electronic music score is composed and performed by Carter Burwell in one of his earliest projects. The film takes place one month after the events of Psycho II where Norman Bates is still running the Bates Motel with the corpse of Emma Spool still sitting up in the house. A suicidal nun, with whom Norman falls in love, comes to the motel along with a drifter named Duane Duke. A reporter also tries to solve the mysterious disappearance of Mrs. Spool as someone begins another murder spree. When the film opened on July 2, 1986, The New York Times wrote a generally positive review, calling Perkins a "very creditable director" and Pogue's screenplay "efficient," concluding that "'Psycho III' expresses its appreciation of the Hitchcock legacy without seeming to rip it off.