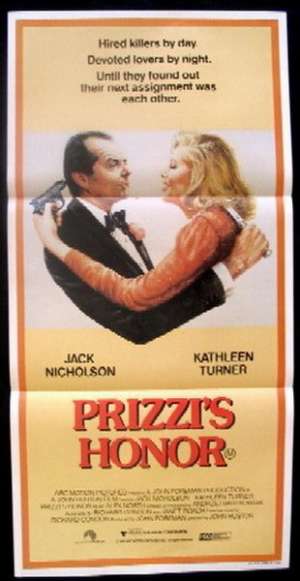 Daybill Poster with art work by Bryan Bysouth. Prizzi's Honor is a 1985 American black comedy crime film directed by John Huston from a screenplay written by Richard Condon and Janet Roach based on Condon's 1982 novel of the same name. It stars Jack Nicholson, Kathleen Turner, Robert Loggia, William Hickey, and Anjelica Huston who was only paid $14,000 at the time as she was not considered talented enough. In the film, two highly skilled assassins are hired to kill each other. However, while trying to find the best way to complete their missions, they end up falling in love. It was the last of John Huston's films to be released during his lifetime. Prizzi's Honor was theatrically released on June 14, 1985 by 20th Century Fox. It was praised for the performances of the cast (most notably of that of Huston). The film received seven nominations at the 58th Academy Awards (including for Best Picture, Best Director, and Best Actor) with Anjelica Huston winning for Best Supporting Actress.