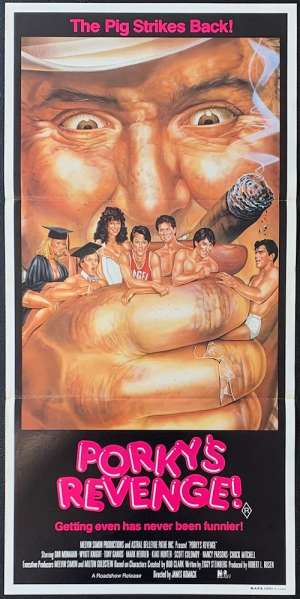 Daybill Poster.The students of Angel Beach High again find themselves under attack from their old elephant-sized enemy, Porky, when they start collecting money for the school basketball team.Pork's Revenge had a budget of nearly $8 million, much of which went on building a large gambling boat. The producers used a $20 million Miami Island mansion, Vizcaya, as a key setting. The film was the directorial debut of James Komack, who said "I'm not going to whitewash the bawdiness or clean up the tone of their antics." The film's soundtrack was released in 1985. Produced and assembled by Dave Edmunds, it features new material from a wide spectrum of well-established rock and roll musicians, including Jeff Beck, George Harrison, Carl Perkins, Willie Nelson and Robert Plant & Phil Collins (under "The Crawling King Snakes" moniker), as well as then up-and-comers The Fabulous Thunderbirds. The film grossed $20,518,905 at the box office.