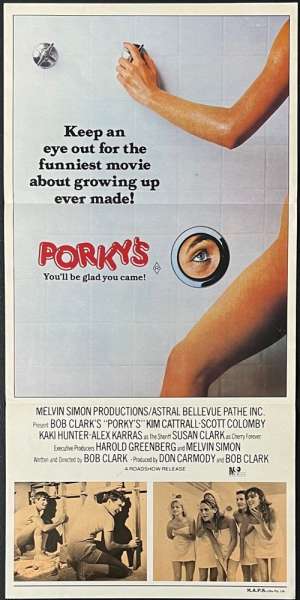 Daybill Poster.Porky's is a 1981 Canadian-American sex comedy film written and directed by Bob Clark about the escapades of teenagers in 1954 at the fictional Angel Beach High School in Florida. Released in the United States in 1982 with an R rating, the film influenced many writers in the teen film genre and spawned two sequels: Porky's II: The Next Day (1983) and Porky's Revenge! (1985) and a remake of the original titled Porky's Pimpin' Pee Wee (2009). Porky's was the fifth-highest grossing film of 1982 earning more than $200 million worldwide.