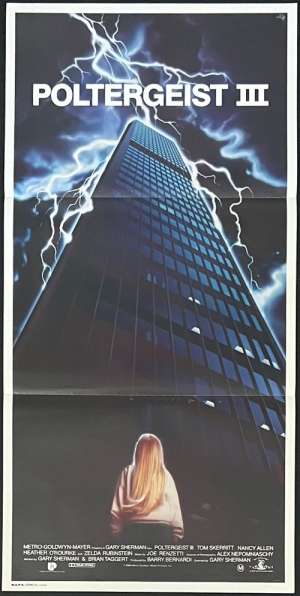 Daybill Poster.Poltergeist III is a 1988 American supernatural horror film co-written and directed by Gary Sherman, and starring Tom Skerritt, Nancy Allen, and Lara Flynn Boyle, with only Heather O'Rourke and Zelda Rubinstein reprising their roles from the previous films. The third and final entry in the original Poltergeist film series, it follows young Carol Anne Freeling, who is terrorized by malicious spirits while staying in her aunt and uncle's apartment at Chicago's John Hancock Center. Released in June 1988, the film marked O'Rourke's final feature, as she died four months before its release at the age of 12. Her death resulted in marketing complications for the film's studio, Metro-Goldwyn-Mayer, who did not want to exploit the tragedy. Due to this the poster is now highly collectible.