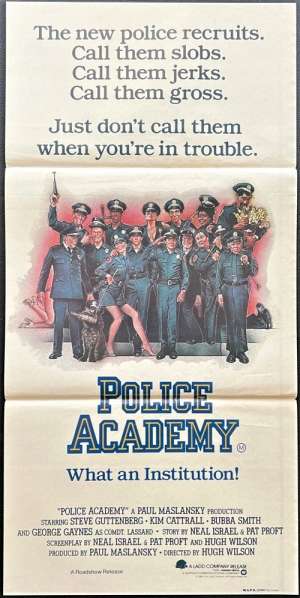 Daybill Poster with Drew Struzan Artwork. Police Academy is a 1984 American comedy film directed by Hugh Wilson in his directorial debut, and distributed by Warner Bros. Pictures. Its story follows a new recruitment policy for an unnamed police department's academy that is required to take in any recruit who wishes to try out to be a police officer. The film stars Steve Guttenberg, Kim Cattrall, and G.W. Bailey. The producers considered Michael Keaton, Tom Hanks and Judge Reinhold for the role of Carey Mahoney. Bruce Willis auditioned for the role of Carey Mohney. It premiered on March 23, 1984.It grossed $8.5 million in its opening weekend and over $149 million worldwide, against a budget of $4.5 million, and remains the most successful film of the series as of 2021. The film spawned six sequels in the Police Academy franchise. The film series has since gained a cult classic status.