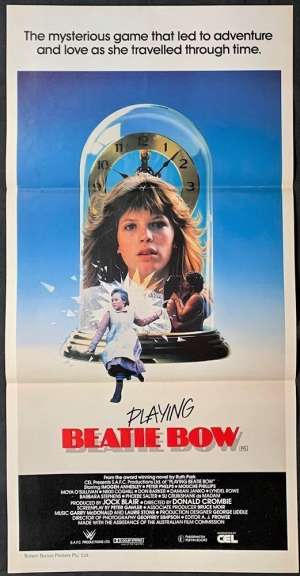 Very Rare Daybill Poster.Playing Beatie Bow is a 1986 Australian time travel drama film. It is directed by Donald Crombie and stars Imogen Annesley, Peter Phelps and Mouche Phillips. The screenplay by Peter Gawler and Irwin Lane is based on the 1980 novel of the same name by Ruth Park. It is rated PG instead of the milder G because Abigail uses a swear word ("shit") towards the end of the film as well as two scenes in which Annesley appeared semi-nude. Also, due to Annesley only being 16 at the time of filming, the kissing scenes between herself and 26-year-old Phelps were "toned down" to avoid controversy. Most of the film was shot in Adelaide, including using one of the city's iconic indoor amusement arcades "Downtown" and its popular second-floor roller skating rink for a scene early in the film. AU$400,000 was spent on recreating Sydney's Rocks area in a disused industrial site. Playing Beatie Bow has enjoyed success post its theatrical release in the home media releases and amongst the education markets. It is now a cult time travel film.