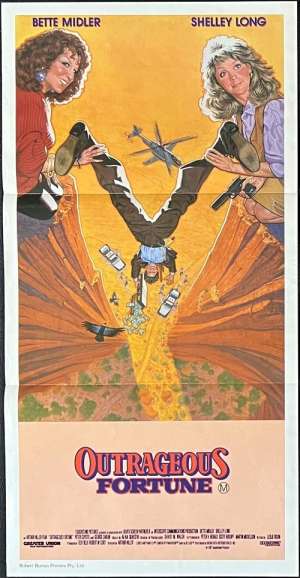 Daybill Poster.Outrageous Fortune is a 1987 American comedy film written by Leslie Dixon, directed by Arthur Hiller and starring Shelley Long and Bette Midler. The title is taken from Shakespeare's Hamlet ("...the slings and arrows of outrageous fortune..."). It was the tenth film of Touchstone Pictures.The film was successful at the box office, and Midler was nominated for the Golden Globe Award for Best Actress – Motion Picture Musical or Comedy, and won an American Comedy Award for Funniest Actress in a Motion Picture (Leading Role).