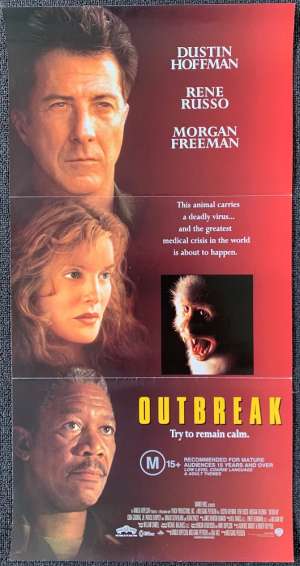 Daybill Poster. Outbreak is a 1995 American medical disaster film directed by Wolfgang Petersen and based on Richard Preston's 1994 nonfiction book The Hot Zone. The film stars Dustin Hoffman, Rene Russo, Morgan Freeman, Donald Sutherland and co-stars Cuba Gooding Jr., Kevin Spacey, Patrick Dempsey and J.T. Walsh. Dustin Hoffman’s role was originally offered to Harrison Ford but he turned it down. Sylvester Stallone and Mel Gibson were also offered the role but they turned it down to.The film focuses on an outbreak of a fictional ebola virus and orthomyxoviridae-like Motaba virus, in Zaire and later in a small town in California. Outbreak's plot speculates how far military and civilian agencies might go to contain the spread of a deadly, contagious disease. The film, released on March 10, 1995, was a box-office success and Spacey won two awards for his performance. A real-life outbreak of the Ebola virus was occurring in Zaire when the film was released. The film's popularity has resurged during the COVID-19 pandemic, ranking as the fourth most streamed film on Netflix in the US on March 13, 2020.