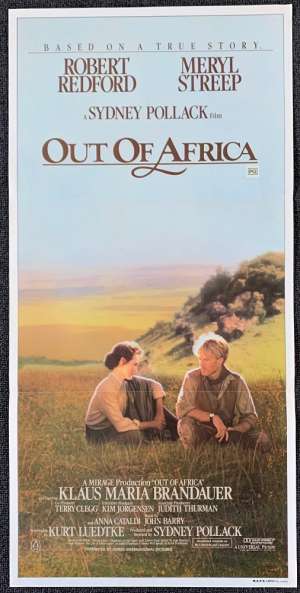 Daybill Poster.Out of Africa is a 1985 American epic romantic drama film directed and produced by Sydney Pollack, and starring Meryl Streep and Robert Redford. The film is based loosely on the 1937 autobiographical book Out of Africa written by Isak Dinesen (the pseudonym of Danish author Karen Blixen), with additional material from Dinesen's 1960 book Shadows on the Grass and other sources.The book was adapted into a screenplay by the writer Kurt Luedtke, and filmed in 1984. Streep played Karen Blixen, Redford played Denys Finch Hatton, and Klaus Maria Brandauer played Baron Bror Blixen. Others in the film include Michael Kitchen as Berkeley Cole, Malick Bowens as Farah, Stephen Kinyanjui as the Chief, Michael Gough as Lord Delamere, Suzanna Hamilton as Felicity, and the model and actress Iman as Mariammo. Out of Africa won seven Academy Awards including Best Picture and Best Director for Pollack.