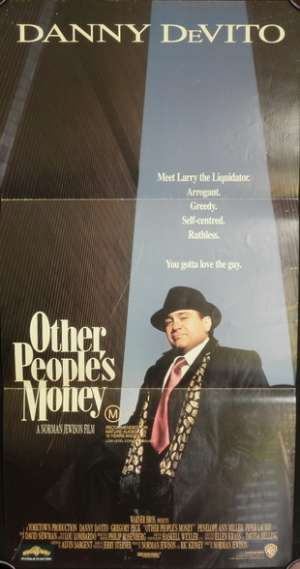 Daybill Poster.Other People's Money is a 1991 American comedy-drama film starring Danny DeVito, Gregory Peck and Penelope Ann Miller. It was based on the play of the same name by Jerry Sterner. The film adaptation was directed by award winner Norman Jewison and written by Alvin Sargent. The film was mainly shot in New York City. During the opening credits, the original 7 World Trade Center lobby can be seen. Some of the scenes that take place inside the factory were shot in the now defunct "Seymour Specialty and Wire" in Seymour, Connecticut. Other scenes were shot in the (also defunct) Gilbert and Bennett mill in Georgetown, Connecticut.