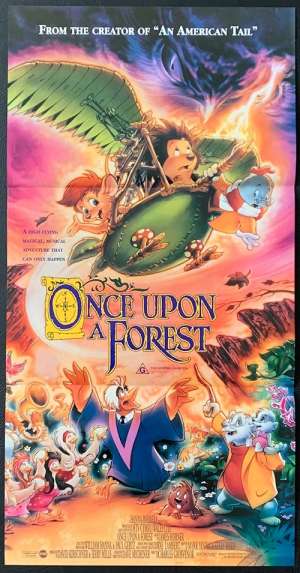 Once Upon A Forest Poster Original Daybill 1993 Michael Crawford

Daybill Poster. Once Upon a Forest is a 1993 animated musical adventure film produced by Hanna-Barbera Productions and distributed by 20th Century Fox. Based on the Furlings characters created by Rae Lambert, the film was directed by Charles Grosvenor and produced by David Kirschner, and stars the voices of Michael Crawford, Ellen Blain, Benji Gregory, Paige Gosney, Elisabeth Moss, and Ben Vereen. The film is about three "Furlings" – the story's term for animal children – who go on an expedition to cure a friend that has been poisoned by chemical fumes. Once Upon a Forest was nominated for an Annie Award for Best Animated Feature in 1993. It won an MPSE Golden Reel Award for Best Sound Editing.