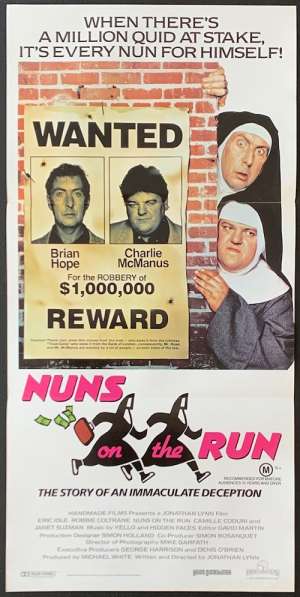 Daybill Poster. Nuns on the Run is a 1990 British comedy film starring Monty Python's Eric Idle and Robbie Coltrane, also featuring Camille Coduri and Janet Suzman. The film was written and directed by Jonathan Lynn and produced by Ex-Beatle George Harrison’s HandMade Films. Many of the outdoor scenes were shot in Chiswick, White City and Kings Cross. The soundtrack was composed and performed by Yello and also features George Harrison's song "Blow Away" in addition to Steve Winwood's "Roll With It". The film was released on 16 March 1990 and was successful in the US on limited release, making $658,835 in first screenings at 76 theatres.