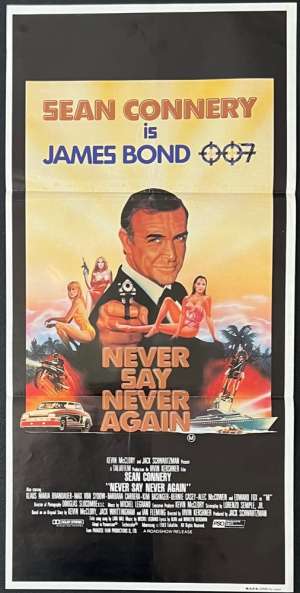 Daybill Poster.Never Say Never Again is a 1983 spy film based on the James Bond novel Thunderball, which was previously adapted in 1965 under that name. Unlike the majority of Bond films, Never Say Never Again was not produced by Eon Productions, but by an independent production company, one of whose members was Kevin McClory, one of the original writers of the Thunderball storyline with Ian Fleming and Jack Whittingham. McClory retained the filming rights of the novel following a long legal battle dating from the 1960s. The film was directed by Irvin Kershner and, like Thunderball, stars Sean Connery as British Secret Service agent James Bond, 007, marking his return to the role 12 years after Diamonds Are Forever. It is Connery's seventh outing and final performance as Bond in a feature film. Only Roger Moore equaled playing Bond this many times. This is the preferred poster artwork of collectors.