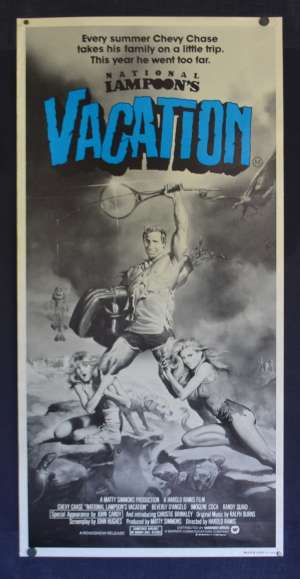 Poster artwork by Boris Vallejo.National Lampoon's Vacation, sometimes referred to as Vacation, is a 1983 American road comedy film directed by Harold Ramis and starring Chevy Chase, Beverly D'Angelo, Randy Quaid, Dana Barron and Anthony Michael Hall. John Candy, Imogene Coca, Christie Brinkley and a young Jane Krakowski appear in supporting roles. The screenplay was written by John Hughes, based on his short story "Vacation '58" which appeared in National Lampoon. The film was a box-office hit, earning more than $60 million in the U.S. with an estimated budget of $15 million, and received positive reviews from critics. As a result of its success, four sequels have been produced: European Vacation (1985), Christmas Vacation (1989), Vegas Vacation (1997), and most recently, Vacation (2015) which serves as both a reboot and a continuation. In 2000, readers of Total Film voted it the 46th greatest comedy film of all time. It continues to be a cult film with the original poster sort after.