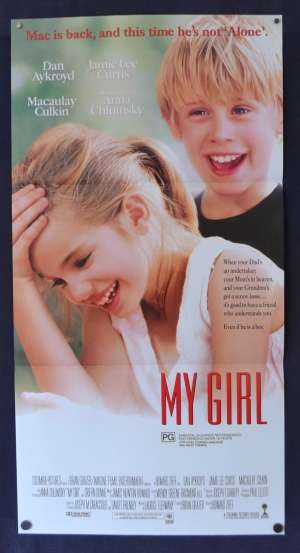 Daybill Poster.My Girl is a 1991 American comedy-drama film directed by Howard Zieff, written by Laurice Elehwany, starring Dan Aykroyd, Jamie Lee Curtis, Macaulay Culkin, and Anna Chlumsky in her feature debut. It is a coming-of-age story of a young girl who faces many different emotional highs and lows during the summer of 1972 in suburban Pennsylvania. A book based on the script was written by Patricia Hermes in 1991. My Girl premiered theatrically in the United States over the Thanksgiving weekend, on November 27, 1991. It opened at number 2 at the U.S. box office, showing at 2,080 theaters. It continued showing across the United States until January 1992, ultimately grossing $59,489,799. It met with critical success and a sequel My Girl 2, was released in 1994.